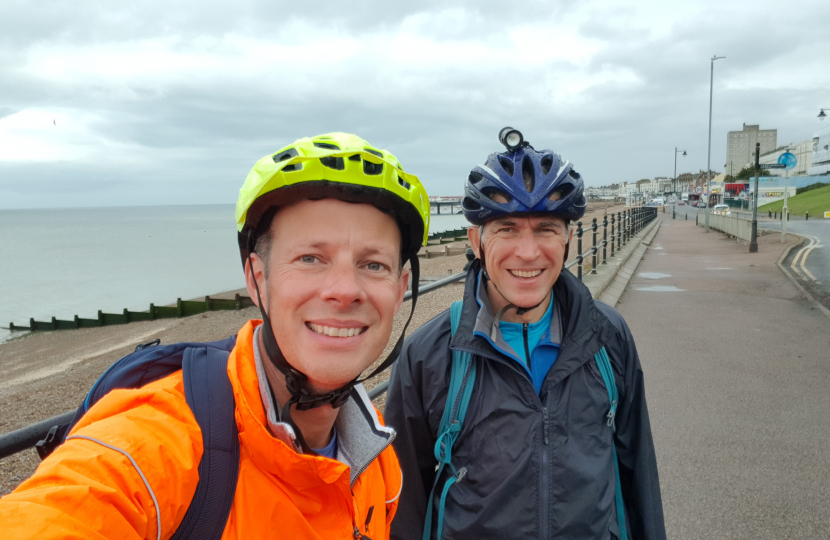 The following article appeared in the Spokes newsletter in February 2022

I believe it is the most exciting time ever to be a cycling campaigner. Not only are record numbers of people using their bikes across the country, but for the first time in my lifetime we have new policies and a dedicated budget to further boost cycling participation.

We mustn’t ignore the very many obstacles we face, starting with the car's dominance on our highways, but there is undoubtedly a strong move now towards walking and cycling. Nowhere is this better shown than in the Government's creation of Active Travel England with a budget of over £1 billion, with cycling Olympian and campaigner Chris Boardman at its helm.

Closer to home, I see teams of officers and councillors at both Canterbury and Kent County Council (KCC) who are keen to advance the cause of cycling. At district level, Canterbury is creating a Local Cycling & Walking Infrastructure Plan (LCWIP) to specify in some detail the future cycle and footpaths we need for short journeys on foot and by bike. For example, the proposed 6 mile Herne Bay to Canterbury cycle route, which I have been working towards for some time, would significantly boost commuter and leisure journeys. The LCWIP will be produced later this year and feed into the new Transport Strategy accompanying our Local Plan, to help us attract developer funds to build these routes, as well as win central Government money.

At KCC, we have been publicly consulting on the Kent Active Travel funded new cycle routes in Canterbury, Birchington and Cheriton. The former, a new cycle route running through Longport and over the A28 onto Burgate, has just been approved at committee and now goes to detailed design stage. I am very excited about this, especially as the new cycle-friendly crossing over the dreaded inner ring-road, will transform the experience of cycling into central Canterbury from the south and the east.

But problems do beset cycle schemes and the A28 Birchington-to-Margate and Cheriton High Street schemes have been rejected following opposition from local residents and businesses. They worried about the loss of car parking spaces and the impact on traffic flows. While I have some sympathies with Thanet and Folkestone residents concerned about the detailed design, I think it is crucial that we repurpose the funds for a new scheme with the same goals of encouraging more people to walk and cycle to their local amenities. Fortunately this is what the KCC has agreed to do so we are considering alternative options. If readers have ideas on this, please do write to me.

You may also have spotted some of the secure cycle storage hubs at our busier stations in Kent, such as Whitstable and Folkestone West, which KCC and Network Rail have been promoting. These are crucial if we are going to encourage more people to do a low-carbon door-to-door commute and I hope many more stations will benefit from these facilities in the years ahead.

Finally, we await the imminent announcement of the next round of the KCC Active Travel funding, which should support the creation of another half dozen or so new cycle schemes across Kent.  As always, I will welcome the active engagement of Spokes members on those proposals with myself and the community when the time comes. By talking to residents and businesses about the many economic, health and environmental benefits of cycling, I am hopeful that we can keep up the momentum and make our county an even better place to cycle.