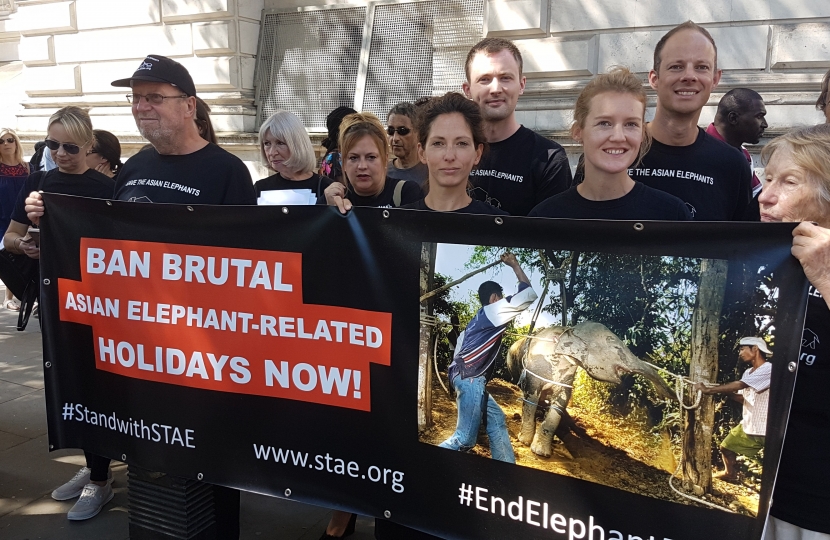 I was delighted to join my colleagues at Save The Asian Elephants ('STAE') in presenting our 200,000 person petition to Downing Street, calling on the Government to provide additional protections to the highly endangered Asian elephant.

You can read an abbreviated version of our petition below, and if you would like to lend your support to it, please visit the STAE website at www.stae.org.

Save The Asian Elephants ("STAE") is a not-for-profit organisation standing for the preservation and protection of the world's remaining populations of Asian elephants. The plight of the Asian elephants is extreme and the need for effective action at government level is now widely recognised to be urgent.

Michael Gove, Secretary of State at DEFRA, spoke eloquently of the African elephant in the House of Commons on 4 April 2018: "Nature, as we know, has the capacity to awe and to inspire, and there are few more awe-inspiring examples of nature thon the African elephant. It is a remarkable, keystone species: an icon which, for many of us, sums up nature of its most impressive, transformational and powerful.”

These sentiments are every bit as true for the Asian elephant except that the surviving numbers of Asian elephants - known as a super-keystone species for their large and crucial beneficial effect on the environment - are now just a small fraction of their African counterparts.

Behind-the-scenes brutality to Asian elephants for tourism and entertainment Asian elephants are uniquely adversely affected by tourism, a great deal generated by commercial interests operating from the UK and involving UK tourists. Baby Asian elephants are poached from the wild to be 'trained' for attractions such as rides, festivals, circuses, parades and temples. The brutal training called 'pajan' means to 'break the spirits'. This involves isolation in a wooden 'crushing cages’, starvation and dehydration and then beating and stabbing with iron bars, spikes and planks into complete submission for brutal use in the tourist industry. The process is so prolonged and violent that it is believed at least half of the young elephants die during or after pajan. This brutality is reinforced constantly throughout the elephants' lives by more beatings and torture. Often captive elephants, tortured beyond endurance, attack tourists, sometimes fatally.

The UK travel and tourist market lacks any regulation that protects either the elephants from such exploitation or tourists visiting such facilities, unknowing as to the brutality involved and danger to themselves. Good faith attempts by some UK NGOs at voluntary accommodations with the travel industry have proved futile. The landscape is littered with false dawns and broken promises.

The Asian elephants, now in their hour of desperate need, deserve better than this.

The Asian elephant species has been designated 'endangered' on the IUCN Red List since 1986, more precarious even than the 'vulnerable' African elephant. The world population of Asian elephants has declined rapidly from millions in the 19th century. Now scarcely 40,000 survive worldwide (less than a tenth of the African elephant population of 400,000), of which some 10,000 plus are captive. The majority of surviving Asian elephants are in lndia. Approximately 4,000 survive in Thailand, with diminishing populations in remaining South East Asian range states. ln the absence of effective international action the species is now, after millions of years, in extreme danger of extinction.

The evidence is overwhelming that the British public want ethical not unethical tourism. This includes a STAE-commissioned poll conducted by Populus in October 2OI5. Now, two and a half years later in June 2018 a further Populus poll, again commissioned by STAE and again ethnically weighted throughout, shows even greater levels of public concern and demands for action.

Further evidence of the weight of public opinion is shown by STAE's online petition calling for change, now approaching 210,000 signatures; and some 2.8 million further signatures to recent petitions aligning with STAE's, and calling on the UK Government to take an active role in saving the species: a total of over 3 million signatures.

By every measure of public opinion, condemnation of the status quo is all but unanimous STAE's policies have received strong statements of support from leading UK based Hindu, Sikh and Catholic organisations, whose names the perpetrators so wrongly associate with the horrors they commit to the elephants.

Our requests of the UK Government

Today, in company with representatives of the media and celebrity, politicians, lawyers, conservationists and other elephant welfare groups, and on behalf of millions of our fellow citizens, STAE presents this letter to you with the respectful request that our Government now takes steps to:

As the international community prepares for World Elephant Day on 12 August, the focus properly shifts to the fate of the Asian elephants. This wondrous, ancient species now stands in our lifetime exhausted, beaten and broken, at the end of its long journey, on the very precipice of its existence. Your influence and that of your DEFRA Secretary of State could now yield results to announce to international acclaim at this October's lllegal Wildlife Trade conference in London, and to show UK global leadership, before it is too late.

We look forward to hearing from you both. Thank you for your time in considering this matter.