‘Visit My Mosque’ Event Shows Tooting at its Inclusive Best 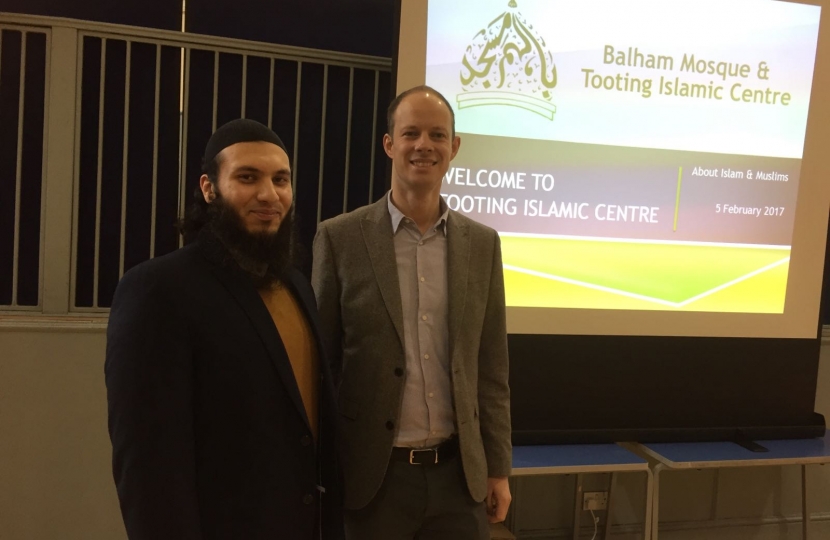 This Sunday saw 150 mosques across Britain open their doors and invite all members of their local communities to come inside and learn more about Islam and its beliefs. As part of this, I was delighted to speak at our largest local mosque, the Tooting Islamic Centre (TIC), which ran a ‘Visit My Mosque’ event.

In the weeks before, the congregation of the TIC had distributed invites to local residents via posters and social media, aimed at attracting as many local people to visit the mosque as possible. First-timers were very much welcome, since the aim of the day was to educate those who know little or nothing about Islam about the religion and its practises.

After our local Imam presented a hugely informative ‘Introduction to Islam’ session, I had a chance to say a few words about the day and why I felt it was so important that we support Visit My Mosque and other cross-community initiatives.

We live in turbulent times across the world, but if we are to build a society which is tolerant and inclusive, we need to break down barriers between different communities. As a long-term resident of Tooting, I have always been reassured by how few divisive incidents we have had. Yet beneath the surface, it is clear from the thousands of conversations I’ve had with residents on the doorstep that some still have concern over Muslim teachings and practises, and what they might mean for our area and Britain as a whole.

Through grassroots projects like VisitMyMosque, we can start to inform and educate all elements of our community about Islam, about what happens in Mosques, and about the broader contribution that Muslims make not just to their community, but to people of other faiths and none.

Not only do attendees of VisitMyMosque get to see that many of the values of Mulsims are shared with people of other faith or no faith – that there is so much more than unites us than divides us – but they also hear of projects that their mosque does to benefit all of the community.

For instance, I was invited to help at last month's Muslim Aid 'Big Food Drive' at the TIC and the Balham Mosque, in which the congregation very generously donated four tons of food to the needy. This was distributed to Wandsworth churches where foodbanks are run, supporting vulnerable people.

We also heard of the leading role that our mosques take within the Balham & Tooting Community Association, a cross-community organisation that runs numerous events throughout the year, bringing people from all walks of life together.

I truly believe that we are ‘one humanity’ and that by holding positive, informative events in our community such as VisitMyMosque, we can help build a better, more inclusive Britain. Therefore, I want to extend my heartfelt thanks to the trustees and congregation of the TIC and Balham Mosque for their efforts, and similarly to all mosques across the country for welcoming in their neighbours for VisitMyMosque.