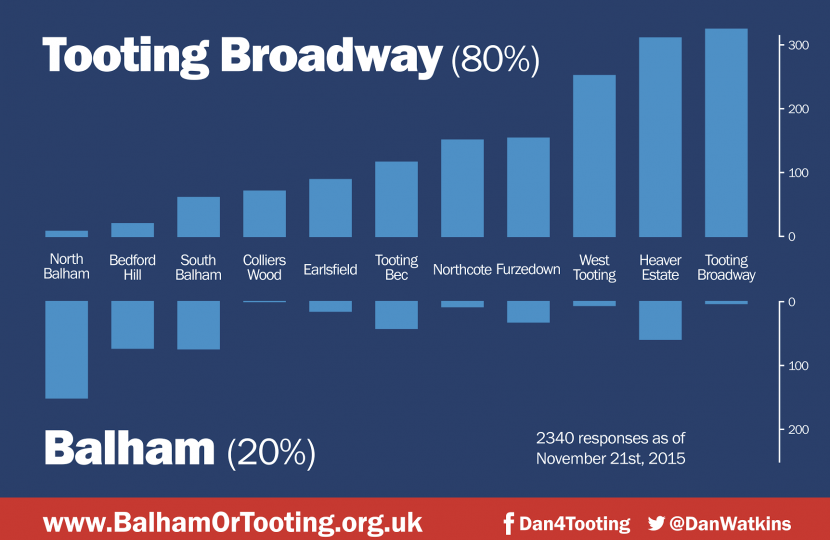 Initial results from a huge survey of Balham and Tooting residents show a large majority in favour of retaining the proposed Crossrail 2 station at Tooting Broadway, despite the additional cost and build disruption compared with a station at Balham.

The survey of 2,342 people in Tooting and Balham was organised by Dan Watkins, Conservative Parliamentary Spokesman for Tooting, who earlier this year was at the forefront of the successful campaign to move Crossrail 2 access shafts from the green spaces of Trinity Fields and Wandsworth Common.

The Crossrail 2 station was originally planned to be at Tooting, but the discovery by Transport for London (TfL) of poor ground conditions under Tooting Broadway station has increased the time, cost and scope of construction work necessary there to build it. As such TfL is now recommending that the station be located at Balham instead.

However local residents have given their thumbs-down to this suggestion, with 80% preferring Tooting, citing the larger regeneration and rail connectivity benefits that Tooting has over Balham.

The responses show strong support for the station, even in some areas adjacent to Balham station:

If you are yet to have your say, you can visit the survey site at www.BalhamOrTooting.org.uk. The results are being accepted by TfL as part of its consultation on the route.

“Despite the extra disruption that Tooting residents would face locally, a station at Tooting Broadway is our community's overwhelming choice. I will continue to work with Wandsworth Council to keep Tooting Broadway on the table for Crossrail 2, which I believe offers far greater benefits for regeneration in our part of London.”

“This substantial survey of our community demonstrates that TfL needs to provide much more information supporting its preference for Balham if they are to convince local residents that it is the best option.”

‘The Northern Line is already overcrowded at rush hour, so it’s essential that Crossrail intersects with Balham or Tooting to bring capacity for an extra 270,000 peak time journeys.’