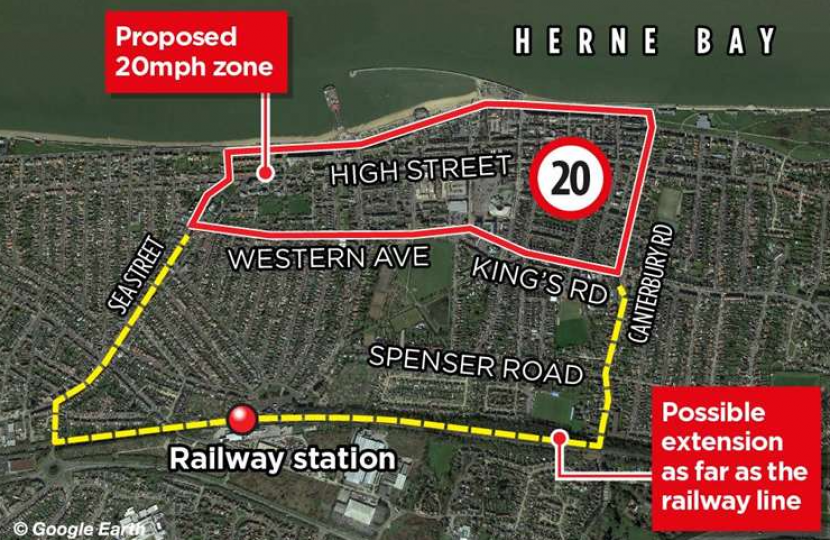 I believe that a 20 mph speed limit zone will help make Herne Bay a safer, quieter and greener town.

Therefore I am delighted to report that my campaign for the lower speed limit has made progress following positive results from the Herne Bay speed surveys which the Council recently commissioned. These show that current average speeds on the roads in the centre of the town are only a little over 20 mph. As such we can introduce the reduced speed limit without first needing expensive physical changes to our streets, which would have taken many years to fund and implement.

We will now press on with the preparation of a large 20 mph zone in the town centre, which will go to public consultation to get the views of local residents, before being implemented next year. Based on other similar zones introduced across the country, I am confident that the zone will help reduce average driver speeds towards 20 mph, not only making the town more pleasant to walk and cycle around, but also making the streets quieter and less polluted for residents living on these roads and attracting more visitors to our town.

One detail we are still working on is whether the southern boundary of the zone should be Western Avenue and King's Rd, or further south at the railway line. I have asked Kent County Council to commission further speed surveys to check current traffic speeds on the streets around Station Road so that we can assess this question and finalise the boundary ahead of the public consultation.

When it come to enforcement, the benefit of a universal 20 mph zone in the town centre is that all drivers will be in no doubt as to what the limit is, such that most of them will drop their speed. Furthermore, new technology being installed in cars will help enforce driving within the speed limit, such as a black box for younger drivers or the new ISA speed management for new cars. With so many cars travelling at 20mph, the small minority of dangerous drivers who ignore speed limits will find it hard to do so as they find themselves increasingly driving behind safer, slower cars. Of course, if over time we continue to have one or two hot-spots for speeding and unsafe driving, we can tackle those with further measures in time.

I was interviewed by Kent Online and the Herne Bay Gazette on this topic and you can read more about it here.

Please do write to me at dan.watkins@kent.gov.uk if you have any views or questions on this topic, as I welcome your views.